Do You Need a Business Coach or a Consultant?

I read an article on Medium by Business Coach Robin Waite a while back where he said:

…and I think I agree with him

With A Business Coach…

With a business coach you have a ongoing relationship that is more holistic in its approach and it focuses on bringing out the best in you and your company. In many cases, a business coach can help you to focus on the big picture and assist you in reaching your business goals.

And a Consulant Does What?

A business consultant generally provides a higher level of expertise in a particular discipline or area and they generallywork within a defined project scope. That expertise could take the form of estimating and pricing, web design, marketing, or strategy planning.

So Do I Need a Coach or a Consulant?

Well, it depends…The best way to figure this out is have a conversation where we can discuss what it is your goals and needs are with your company and we’ll come up with a recommendation and plan together.

What Kind of Things Does A Coach Work On?

What Kind of Projects Does A Consulatant Work On?

In a coaching relationaship the goal is to work with our clients to achieve these kinds of results:

And to make sure the work we have done lasts into the future we develop longer term sustainablity plans to keep things rolling. 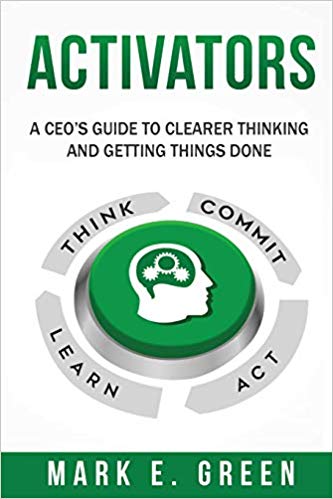 My friend Mark Green (we grew up in the same hometown a few years apart) has written what I think is the best or most valuable business book I have read in 2019.

Activators: A CEO’s Guide to Clearer Thinking and Getting Things Done  by Mark E. Green

Mark’s book is a mix of the best in business management along with a solid scientific understanding of human behavior. You can taste teachings of Viktor Frankl, Jim Collins, Daniel Kahneman, Peter Drucker, Charles Duhig, Simon Sinek, Marshall Goldsmith and while he never mentions or cites them I hear lessons I’ve learned from W. Edward Deming, Leonard Mlodinow, Mihaly Csikszentmihalyi, Taiichi Ohno, and Peter Senge. And he intorduced some paths I’ll have to now explore myself with Carl Richards, Philip George Zimbardo, Robert Cialdini, David Kolb, and Alan Deutschman.

Don’t let any of that scare you off. As I said, Mark has done all the reading for you so you don’t have to and he has organized and presented all that thinking in a precise and concise manner like the classic everyman you would want to have a beer and a burger with, a Tom Hanks character.

But what Mark has done is take all this scholarship and synthesized what he calls  8 Activators for business leaders.

While the book has a stated intention of being for CEOs I think the lessons and tools in the book are applicable to leaders of groups of all types.

To Get Started Means Starting a Conversation About Your Small Business & Your Project Ideas. Call or EMail TSBS.co to Get the Dialog Going... Let's Talk. To Get Started Means Starting a Conversation About Your Small Business & Your Project Ideas. Call or EMail TSBS.co to Get the Dialog Going... Let's Talk.