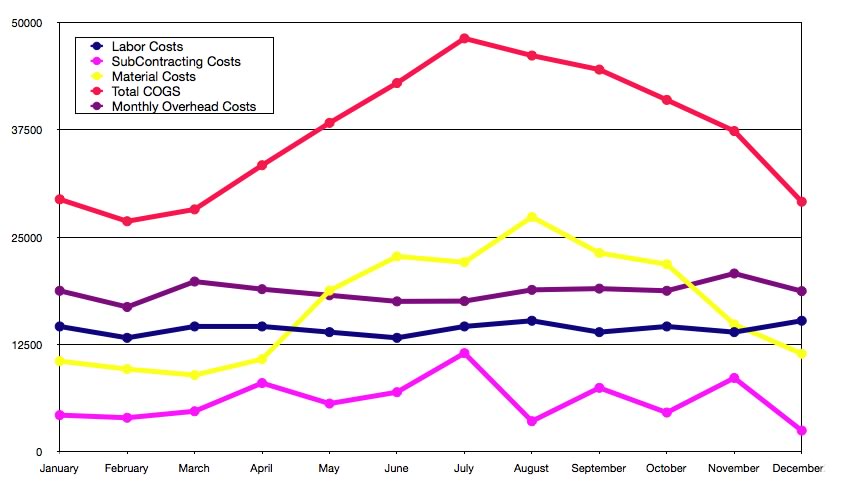 What Can We Learn From This Chart?

What Can We Learn From Chart? In a discussion on FaceBook regarding markup my friend and collegue Dan Kolbert of Kolbert Builders in Portland ME wrote:

“…the most predictable aspect of your volume is your own crew in the field, and your markup should be connected to that, rather than something much more variable, like your overall volume, the expense of materials, etc. Gerstel [David Gerstel Nail Your Numbers: A Path to Skilled Construction Estimating and Bidding] argues for the number of jobs your leads can run, figuring out how much OH/P needs to be recouped per week per lead, and divvying things up. Others (myself included) look at the overall estimated billable hours your crew will get in for the year, and making sure your jobs recoup OH/P based on those numbers.”

What he is talking about is illustrated in this chart. Back in January of 2009 I was trying to teach myself Apple’s Numbers program to see how it compared to Excel (to make a long story short it doesn’t compare, stick to Excel). So I had just gotten the 2008 financials from one of the contractors I was working with as a coach and consultant back then so I decided to see how charting in Numbers worked plotting out his Sales data for the year.

I noticed the chart I was working on perfectly illustrated what I have been writing about in regard to the problems in using a Volume Based Markup approach to pricing work. In a Volume Based approach the Total COGS can bear little relationship to the month to month real cash flow requirements of a company. In months where Material and SubContracting sales are lighter a company can be cash strapped to even cover their Overhead requirements. So I thought I’d publish the chart and see if everyone else would see what I see.

Another collegeue of ours Bob Kovacs at the time Vice President of Preconstruction- Skanska USA Building wrote:

This was a small Connecticut based contractor and as I recall it was just 3 guys working together. They did general carpentry, mostly exterior, but a lot of custom decks in the summertime and during the colder winter months they worked inside picking up a lot of interior painting jobs to fill the gaps in their schedule so that is why the material costs went up in the summer months and down in the winter.

Back in 2004-05 I collected and compiled some data on different project types to see what the ratio of Materials to Labor Hrs was for different kinds of projects or more specifically how many dollars of materials were being installed per Labor Hr. concrete and masonry work was the lowest and kitchens were the highest but the message is/was not all work is the same in the ratio of time the project takes to the material cost involved.

So contractors I have talked to argue their market, their work product doesn’t vary seasonally but that ignores the fact that even if you do the exact same kind of project all years long this same kind of variation takes place within a certain type of project. Not all task have the same ratio of materials (or subs) to you own labor’s time.

Recently yet another  colleague on FaceBook reminded me of a lesson learned in a book I read years ago (The Flaw of Averages: Why We Underestimate Risk in the Face of Uncertainty by Sam Savage) which teaches us: “…plans based on assumptions about average conditions usually go wrong”…&… “A bottom line based on average assumptions should be the average bottom line, right? It may miss fluctuations from month to month,” and project to project and task to task.

So given all that why would we possibly want to figure our project thinking on the assumption that that ratio stays constant? You dollar volume is always changing depending upon the task or type of projects you are doing. Why not base your Overhead recovery on the number of Labor Hours your company can generate since that remains more constant and predictable?

The “What Can We Learn From Chart?” Worksheets: In sheet 2 (there is a cover sheet) I enter the data for the contractor I described above and breakout the Gross Profit Totals both as you see it by a Volume Base Markup and a Capacity Based Markup.

Sheet 3 is just a more detailed look at the data according to using a Capacity Based Markup. Sheet 4 is just a more detailed look at the data according to using the Volume Based Markup method.

In Sheet 5 the two methodolgies are compared.

It’s worth noting that is February the cash receipts for the Volume Based Markup method are so low that Net Profit is negative. The company is losing money.

The reality is contractors using the Volume Based Markup method wont get the Low Relative Cost of Labor to High Cost of Materials, and SubContracting jobs because they’ll be pricing themselves out of the market. The reality is the jobs they will get will fall into the standard mid range mix model  and the High Relative Cost of Labor to Low Cost of Materials, and SubContracting jobs like that they will do at a minimal profit or at a loss. See Comparing Markup Methodologies In Real Some World Pricing Scenarios for a deatiled hypothetical case study of the problem. The “What Can We Learn From Chart?” Workbook

We have an Excel Workbook with all the data that was used to generate the chart about and a log more. If you like to check it out and try out different scenarios yourself just fill out the form below and download you copy of the workbook. The 5 Revolutionary Technologies That Will Dominate 2017 | SalesForce.com Blog

The 5 Revolutionary Technologies That Will Dominate 2017

Inventions, science, and technology leapt forward in the 20th century faster than any century prior. A hundred years ago innovators had just invented radio tuners and circuits, affordable automobiles, and the first ‘robot’ in 1921. Fast forward to now, and we’ve created an immersive digital world

7 Things Steve Jobs Said That You Should Say Every Single Day | Inc.com

He came, he saw, he conquered…and he left behind some words to live by: 1. “Innovation distinguishes between a leader and a follower.” Ideas without action aren’t ideas. They’re regrets. Every day, most people let hesitation and uncertainty stop them from acting on an idea.